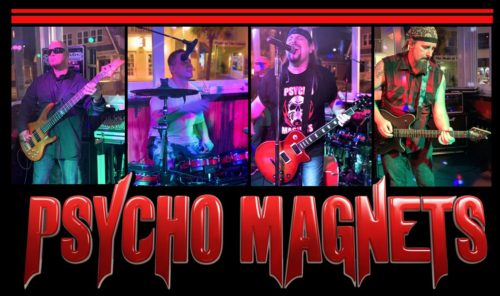 Psycho Magnets are a Driven, High energy Band based out of Daytona Beach Florida. The band was conceived well over 17 years ago and has not stopped Rocking since.
Originally starting as a cover band, Psycho Magnets quickly changed direction to focus on original material as well as covers. With that change, the band instantly built a following that have stayed true to this day.

The Psycho’s began receiving many local awards such as winning Central Florida’s “Battle of the Bands” and being voted “Best Band” by T.E.M. magazine as well as features in many local magazines. This climb in popularity meant bigger venues and bigger shows.
Psycho Magnets were offered an opportunity to open for Vince Neil of Motley Crue. The success of that show prompted the band to be asked to open up for the legendary Blue Oyster Cult. Their continued popularity brought even more opportunities to perform with acts such as, Bang Tango, Pretty Boy Floyd and Steven Pearcy of RATT.

In 2009 Psycho Magnets released their self titled CD which includes the fan favorite original songs, Scream, Feel It and Set Me Free. Tracks from the CD have had major airplay and are being requested on various internet radio stations and iTunes downloads.
Psycho Magnets are currently CD “13” Is available on iTunes and at shows.
Be sure to join Psycho Magnets at a live show, You won’t want to miss it!