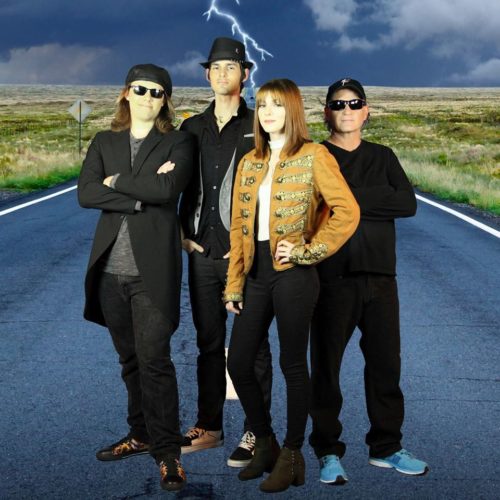 GREYE is made up of vocalist Hannah Summer, guitarist Jett Wolfe, bassist Joshua Reid, and drummer Ray Grimard. Since their inception in 2012, they have rocked crowds both locally and nationwide. They released their first album , “Providence,” in 2014, and since then have gone on to release three more full-length LP’s, “The Tube” in 2015, “The Worrier” in 2016, and their latest release “Windows” in 2017. With influences like John Butler Trio, Yes, Kansas, Ambrosia, Red Hot Chili Peppers, and even video games, there is something in their ever-growing discography for everyone to enjoy, no matter your musical preference.
Their rigorous work ethic and busy schedule have come to define them as musicians, with gigs all over the east coast in addition to many countless hours spent in the studio, they still manage to fit in multiple practices each week. They have performed on the coveted stages of the Key West Song Writer’s Festival, Awendaw Green’s Barn Jam in Awendaw, SC, The End in Nashville, TN, The Dock in Ithaca, NY, Freebird Live in Jacksonville, FL, The Middle East in Cambridge, MA, The Hungry Tiger in Manchester, CT, Stanley’s Pub in Cincinnati, OH and countless others. Having recently returned home from a month-long tour from the Midwest to the Northeastern United States, they are now getting to work on producing their fifth record, as well as putting together a tour for summer of 2018.
“Greye crafts indie rock with heart and soul on “Windows”. Passionate pours out of the pieces as their stories recall the relationships and the situations encountered in a life lived most fully. The band comes through swinging with a western twang to the guitar, with rhythms keeping the whole thing very much centered. By opting for a gorgeous rush of sound, the songs have a blurred beauty to them, with the vocals rising above it all. Defiance defines the sound for it is one that explores the tales of those who overcome…Powerful to its very core, Greye’s “Windows” infectious melodies and unforgettable harmonies linger in the mind long after they are over.”
+ Google Calendar+ iCal Export